Evel Knieval Stunt Cycle
This is one classic toy that is almost more famous than the stunt-man himself!

For some strange reason, this was one of the best toys ever (even though I never had one. Awwwww). My cousin had one though so got to play with it a fair bit.

The toy itself consisted of a replica of Evel Knievel, his bike, and a red box with a handle. You 'plugged' the rear wheel of the bike into the box and turned the handle which spun a flywheel inside the box.

This made the coolest revving sounds ever and also spun the rear wheel of our Evels bike.

Once you'd got the revving noise so high pitched that every dog within a 500 yard radius went fruitbat crazy it was time to press the button and unleash the world's greatest stunt cyclist! 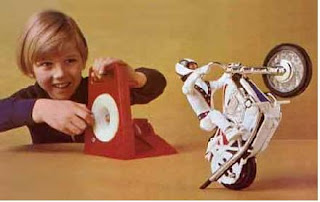 If you believed the adverts he then sped along gracefully and pulled wheelies, flew up ramps to jump over a carefully arranged line of toy buses and landed with style. On your bedroom floor however he fell onto his side, rode straight into the skirting board or scared the bejesus out the cat. About once in every 20 goes he did actually complete a stunt - and it was these 'long shot' odds of getting him to work that made the toy all the more fun. That and your imagination of course.

The Evel Knievel Stunt Cycle is / was a very cool toy and variations of it were also released. The stunt dragster came complete with a deploying parachute which usually got tangled up with some lego, and the stunt chopper bike was even less stuntworthy than the cycle.

For some reason though the stunt cycle holds the most charm. A true vintage classic toy!

The Retro Brothers
In 1984, The Retro Brothers were accused of being too harsh when reviewing games. Under intense scrutiny, they promptly changed their identities and escaped to the Glasgow underground.

Still wanted by middle aged hippies, they survive the daily grind by having a bit of laugh as retro game bloggers. If you want any information, or something for your blog... and no-one else can help, if you can contact them, then maybe you can hire.... The Retro Brothers
The Retro Brothers are experts in all areas of retro computing.
Got an old game? You can bet they have played it.
Got some old hardware? You can bet they have used it.
From Twin Kingdom Valley to Surbiton Way there's barely a retro game they haven't played. You'll get Flashback's from Another World, so join in with with our retro-whirl. Oh - and they're not bad at programming too!